Scents have an ability to evoke a precious memory, to re-ignite the senses, and even take you to places unexplored. That’s exactly what the Les Parfums line aims to achieve, and with Louis Vuitton’s special fragrance pop-up that’s now open at Changi Airport Terminal 3’s departure hall, you can rest assured that you’ll be well-equipped on your flight out as you keep well-scented on your journey. 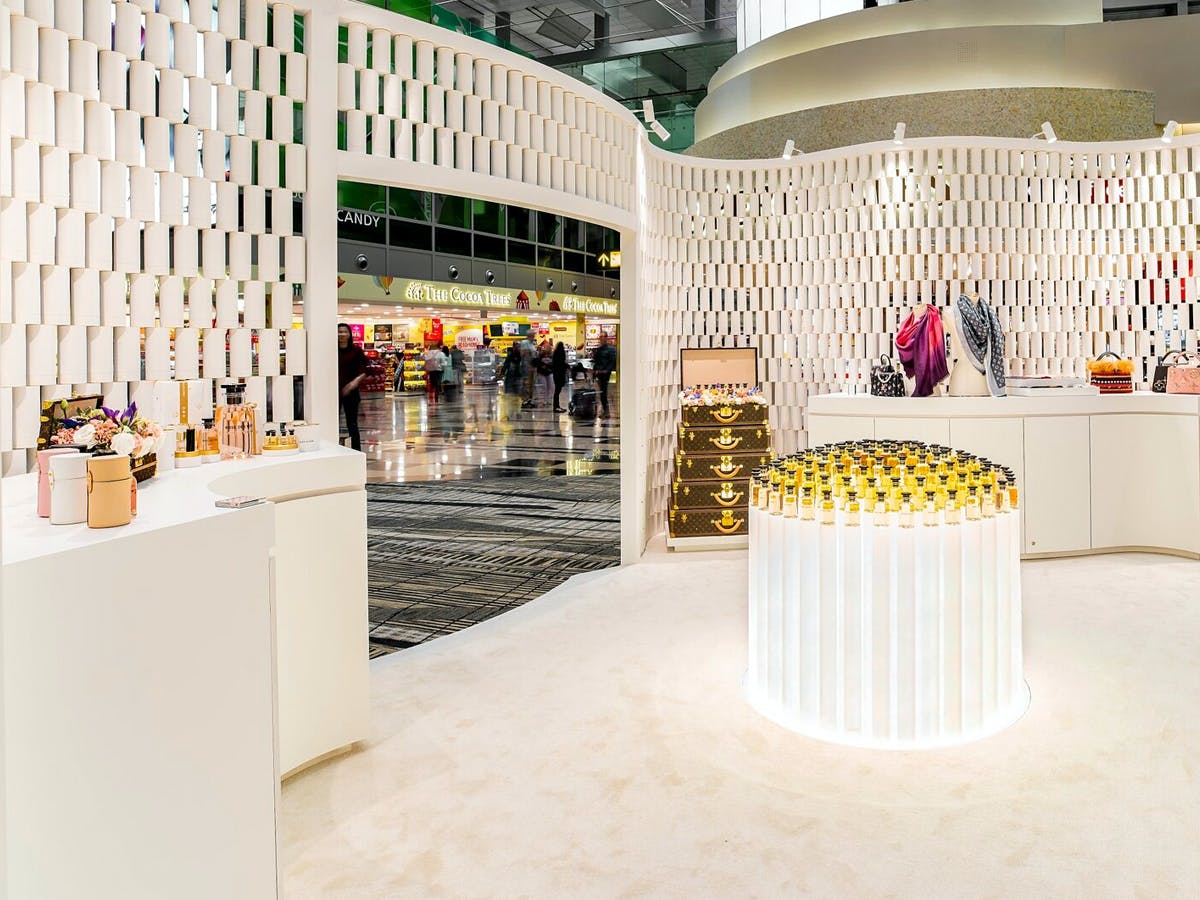 Now, these 7 scents aren’t your typical run-of-the-mill designer fragrances that come in a pretty looking bottle with a one-dimensional scent that fades off within an hour or two. Ranging from Rose des Vents to Mille Feux, each scent was curated by Master Perfumer Jacques Cavalier Belletrud, who narrowed down quite a number of specially crafted scents to just seven. You’ll also be pleased to know that all the scents have been beautifully packaged into a special travel set that’s exclusive to the pop-up at Changi Airport.

The scents begin with Rose des Vents which features a delectable mix of 3 different roses, Centifolia, Turkish and Bulgarian, that over time exude a milk-like note that’s pretty pleasant before it winds down with hints of cedar and pepper. Turbulences is all about the narcotic tuberose that’s mixed with jasmin grandiflorum from Grasse and jasmine sambac from China. Dans La Peau, on the other hand, is interesting because it features a leather scent that was obtained from the infusion of natural cowhide leather soaked in alcohol that’s then intertwined with jasmine and narcissus to create a fragrance that has the same scent as your favourite Louis Vuitton leather bag.

The fourth in the series would be Apogée, which is in fact the bestseller in our region. That probably is due to the fact that the scent creates a therapeutic effect which comes from the lily-of-the-valley flower interlaced with jasmine, magnolia, rose and sandalwood. Moving on to Contre Moi, which is a popular favourite for lovers of desserts and all things sweet thanks to an infusion of vanilla within that reminds you of ice cream (no, not diabetes) in a bottle. For the lovers of the enigmatic and mysterious, Matière Noire is one that embodies sensual notes of patchouli and agar wood that’s further intensified by fruity and floral notes of blackcurrant and narcissus. Last but by no means least is Mille Feux, which rounds up the 7 with a celebratory scent that carries a mix of osmanthus, leather infusions and raspberry, which come together like the best dessert you ever had. And here’s the best part if all 7 scents appeal to you. Coming together in a special Travel Set, each 7.5 ml cartridge can be taken on board with you. Each cartridge can also be attached onto the atomiser which locks it all in with a magnetic closure. Used one scent but want to switch to another? Interchanging the scents is a breeze thanks to the eighth cartridge, the Eau Neutre, which cleans and neutralises the previous scent. Retailing for SGD486, it is available exclusively as a pre-launch special at the Terminal 3 pop-up from now till 28 November 2017. Also, for those who have a full-sized perfume bottle that they swear by, Louis Vuitton also has an exclusive Monogram Canvas Orchid travel case (SGD608) that’s limited to just 100 pieces.

Now, excuse us as we search for the next flight out because firstly, it’s a Monday and we need an escape from the work week already. Secondly, because that’s the only way to get to the pop-up pronto to get those limited editions and lastly (and most importantly), you’ll want to be smelling your best on said flight out of Singapore.