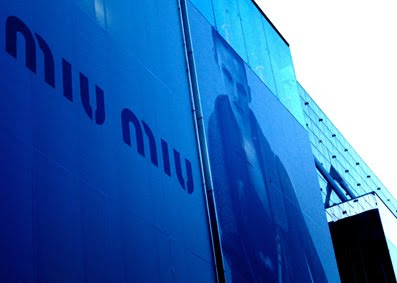 What a difference a month or so makes, especially at Orchard Road. Today was the first time since I came back from you know when I actually spent a leisurely afternoon in town and boy was it fun!

Since I was away Prada had opened their largest boutique in Singapore yet at ION Orchard, which is absolutely breathtaking. I’ll even go as far as to say that it is even bigger than their famous next door neighbour. I am also very impressed with Prada’s selection of bags for men this season; but more on that later.

Another much anticipated event is the revamping of Paragon’s frontage, which sees major reshuffling of its luxury tenants. Miu Miu has moved down from the 2nd level to the ground level duplex unit which is still under renovation (shown above), and Prada has taken over YSL’s previous unit at Paragon (the latter has been relocated at ION Orchard). Gucci is also getting her very own duplex unit which is still under renovation as well, but at the far end of Paragon facing Takashimaya Department Store. Coach has also opened her first ever flagship in Singapore, in Paragon facing Burberry with a special section devoted to guys.

But before I sign off, a piece of not-so-good news; specifically for fans of the Miu Miu Coffer. It is now going for SGD2630 each, as opposed to June 2009’s reported price of SGD2370.

One last thing. I have been confirmed to attend 3 upcoming grand openings along Orchard Road in the coming weeks (1 at Paragon and 2 at ION Orchard) and trust me when I say this; they’re going to be huge, so stayed tuned for updates.

Meet Louis Vuitton's New Bag Of The Season, The Coussin

Leave a Reply to dee dee