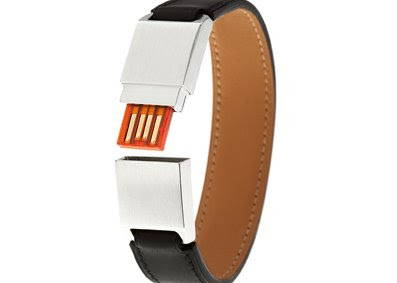 I thought I had seen everything when Mr Duck unveiled his spanking new toy, the Louis Vuitton Damier Graphite USB Key (SGD690), which had 4GB of storage space encased in palladium.

That was until I went through the Fall-Winter 2009 Mens Hermès presskit which I received yesterday. At first I thought it was some new fancy bracelet with silver-plated metal and Chamonix calfskin, but on closer inspection, I realised it too was a USB flash drive. And of course Hermès ups the ante by launching it with 8GB worth of storage space.

So now besides being able to own a thumb with enough space for most purposes, it can double up as a rather gorgeous bracelet for the guys as well. Form and function satisfied, it retails for SGD1700. Hey, it is Hermès afterall…

And before I sign off, remember the 3 gorgeous bags I featured previously from the upcoming season? I’ve got the prices in, they are SGD43,600 (So Kelly 22), SGD9300 (Alfred Pouch) and SGD21,300 (Hector Suitcase Twins) respectively.