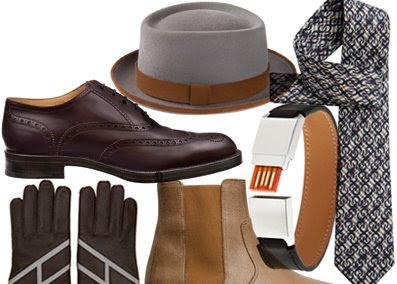 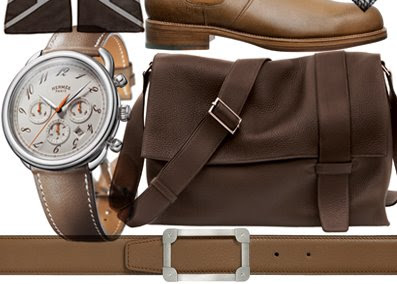 Like the womens collection, the Fall-Winter 2009 Mens Hermès collection is very lean this season. Preferring to focus only on classic items that will perhaps sell more easily (though no less expensive), at least they got the formula right. Everything is just dapper, and as cohesive as it gets. Sure there are a couple of fun pieces (which I will share in another post later), but generally everything above is timeless, easy to match and will look good on most anyone.

The Alfred Pouch and USB flash drive bracelet have already been covered previously, so let’s move on to the rest. We’ve got a felt hat (SGD1300), a silk and cashmere tie (SGD360) and 2 pairs of shoes; an Oxford in glossy calfskin (SGD1450) and an ankle boot (SGD1700).

Then there are the pair of driving gloves in glazed lambskin and jersey (SGD930) with an added touch that’s thoughtful as well. Reflective jersey bands in the form of a H increases visibility for the driver at night. The belt is gorgeous as well, boxed calfskin topped off with a silver-plated buckle that evokes the corners seen on their suitcases (SGD1060).

And last but not least, the Hermès Arceau Chrono Alezan, inspired by the world of riding which is very pivotal to what Hermès represents. Adorned with emblematic colours like Orange and Chestnut, its italic numerals add a subtle and refined touch. I love it so so much, even if it costs SGD6940. If you could get anything from the collection, what would it be and why?