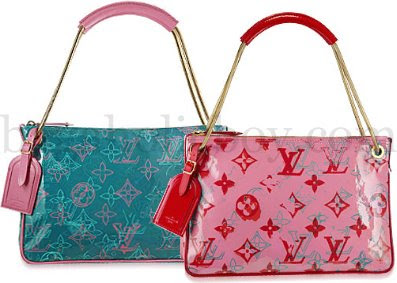 Officially released are the new Louis Vuitton Monogram BonBon Pochette Rose in Green or Pink. Created by Richard Prince and Marc Jacobs, the Monogram BonBon is also one of Louis Vuitton newest designs, shiny patent leather printed with colourful symbols. I am not a great fan of the Monogram BonBon, but celebrities like Lindsay Lohan have already been spotted with the one in Pink, and together with it’s limited edition tag, should become another bestseller for Louis Vuitton. Tentative pricing according to the local Louis Vuitton hotline puts it at SGD2340.